Weekly / Listen when you feel your heart skip a beat

blog digest #47 / the workout front has been rough, but it's got to get worse before it gets better, right?

I’m not sure if this week was better than last week… in fact, it may have been worse. Motivation to work out was not present this week, and I didn’t push through the stubbornness and do it anyway. And for that, I am disappointed in myself. I skipped 3 days worth of workouts, whereas last week, I only skipped on Friday.

This week was so long, though, and I feel like I barely made it out. I’ve been having some harsh thoughts about myself, which lead me to think that maybe *that time of the month* is just around the corner. So pushing myself through the disappointment I felt and the anxiety I was having just did not happen.

I may have started my workout at 10:45 last night as well, but I did it! I also finished the workout with a fast-walk around the block, while it was 33 degrees out (it was even trying to snow on me ❄️) and it was past 11pm at that point. 😳 On some days, the dedication is real! I need to prioritize this for every day though! 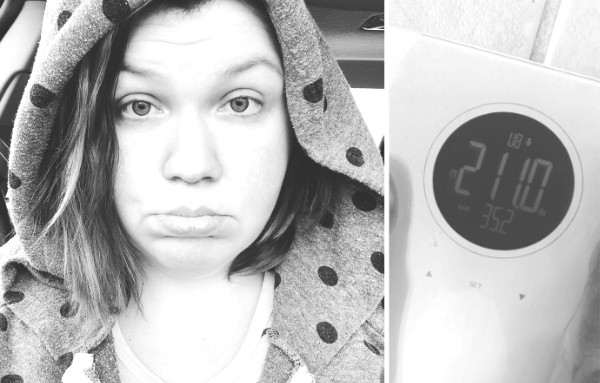 Sad face when I didn’t meal prep for the day & my current weight: 211! (About 4lbs down since I committed.)

Eating hasn’t been the best either, but only up until Thursday. I packed my lunches Monday through Wednesday, but didn’t prep Wednesday night, and that was my downfall. I am really excited about the new shoes I bought yesterday, though! My Adidas workout shoes I had formed a gaping hole on the outer seam of my right shoe 😭 so I went and bought new ones, and they’re niiiiice!

This week at work was a bit rough, too. There were morning when I would get there and would instantly wish the day were over so I could go back home and either sleep, blog, or read. (That’d be cool if I could do all three at the same time, right?)

Next week, I’ll make sure I prep, eat consciously and healthily, and drink my 80+ ounces of water daily. 😬 I know I can do it! 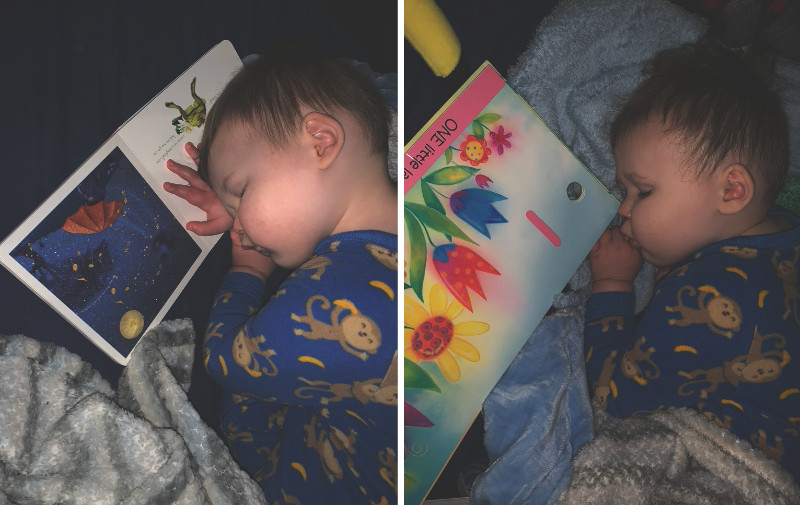 My little man has also been waking up super early this week. My mom is wondering if maybe he’s becoming more aware of peeing at night, and that’s what is waking him up? Before I knew that, I just handed him a book for him to look at until I~ was ready to get up (momma needs her sleep, guys) and whenever I’d go back to check on him, he’d be fast asleep with his book. 😆 These pictures are from two separate nights, hahaha.

He’s growing so big, and I’m becoming more and more emotional about it every day. Before long, he’s going to outgrow his crib – he’s getting so long, and so smart! He’s been learning the features of his face, and he’ll point to his nose, mouth, ears, cheeks and hair! (We’re still working on ‘eyes’ 👀) He’s making me so proud, you guys. 😭

Next week, I have lots of content prepared! Yay! 👍🏻

Still nothing new! I’m attempting to read more books that I own before buying new ones. (Unless I neeeeeed them!) Look out for my official #StartonYourShelfathon post later this week, where I’ll be talking about all the books I’ll be trying to read from my shelves this year! I watched some Disney movies with my little this week! He loved watching Tarzan and Toy Story 2 with me, and he even kind of watched the new Aladdin, even though it was mostly me, my mom and my boyfriend watching it. I also continued some of Schitts Creek which is so hilarious, and then ISaac and I watched one of the documentaries on Disney+ called Drain the Bermuda Triangle. I wanted to watched Drain the Titanic, but Isaac didn’t want to watch that one. 🙄 But it’s fine… Even though he definitely fell asleep at the end. 🤣

how was your week? what shenanigans did you get up to? what have you been reading? wish me luck with my health efforts this week! 😅