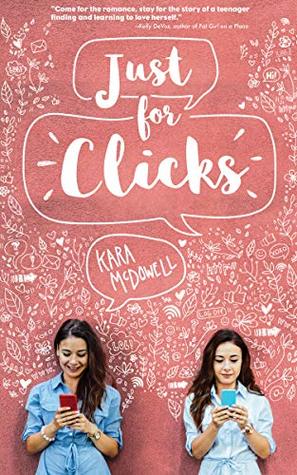 Mommy blogs are great... unless the blog happens to belong to your mom.

Twin sisters Claire & Poppy are accidental social media stars thanks to Mom going viral when they were babies. Now, as teens, they're expected to contribute by building their own brand. Attending a NY fashion week and receiving fan mail is a blast. Fending off internet trolls and would-be kidnappers? Not so much. Poppy embraces it. Claire hates it. Will anybody accept her as "just Claire"? And what should Claire do about Mom's old journals? The handwritten entries definitely don't sound like Mom's perfect blog persona. Worse, one of them divulges a secret that leaves Claire wondering what else in her life might be nothing but a sham...

I received a copy of this book via NetGalley (thank you!) in exchange for my honest review.

This book, guys. It was really good.

Just for Clicks is about fraternal twins, Poppy and Claire and the way their mom’s fashion and lifestyle blog has molded their lives and how they deal with being internet famous. But this is Claire’s story, and Claire’s story alone.

Claire is unlike her sister in many ways – where Poppy is all about the fashion and internet fame, and embracing the lifestyle their mom built for them, Claire would rather be a normal teen, and clings to her privacy wherever she can (which is pretty impossible considering the family business). Since building their own brand apart from their mom’s blog, and becoming YouTube famous with their vlogs, Poppy is a pro at thinking up new videos, and she’s so good with the fans and fame in general. Claire feels there is some unspoken competition… and she’s constantly losing. While she doesn’t want to reveal every little aspect of her life to fans and trolls alike, she also is torn to keep her mother and sister happy. But she would much rather stay behind the scenes because Claire really enjoys coding and web design.

The only person I’ve ever competed with is Poppy, and it’s pretty clear how that’s turned out. She wins everything, every time.

Enter: Rafael! Right from the get-go, I found him intriguing. He’s a traveler, or rather, his dad is and he just has to tag along. (His dad is with Doctors Without Borders.) Rafael’s got interesting hair, he basically never has a cell phone, and he is a beast at maintaining eye contact. Plus, he’s super disturbingly friendly and has the uncanny ability to fit into a school in a single day.

The way Rafael and Claire meet is pure fate. Claire drops her phone, thus cracking the screen and rendering it useless. She goes into lunch, unable to contact her sister to see where she is, and has to sit and eat alone. Everyone else has their phone in their face, which prompts Rafael (at school on his first day) to pull up a chair and sit with Claire.

I think about all the kids in the cafeteria bent over their screens, and how I may have never gotten to look into Rafael’s eyes if my phone had been working.

One of the things I really liked about the book were the email clips/text convos/tweets/etc. placeholders between each chapter. It’s a really cool feature, especially in a novel where internet culture is a prime focus. (For example, a bird poops in Claire’s mouth – so gross, poor Claire – and someone films it and uploads it to YouTube. It goes viral. So then she gets an email from a mouthwash company, offering a collaboration opportunity, and you get to read the direct email in between the chapters.)

The fact that Claire meets Rafael, a traveling teenager who isn’t phone- or technology-obsessed (plus, bonus, he doesn’t even know who Claire Dixon IS) was a really nice premise. Rafael is non-existent on social media, and gives Claire a “blank slate,” so to speak. They start to become really good friends, and they had really good chemistry. But Claire starts to really like him, but can’t even begin to guess what he’s thinking when they’re together.

I really loved these two as main characters, and even though I couldn’t really connect with Poppy, it felt okay, since this was Claire’s story. The fame and popularity drives a wedge between Claire and her sister, and when Claire uncovers some devastating news, it makes the chasm even greater.

If you’re looking for a book that drips with internet culture, about a girl who is dying to get her face off the grid, meanwhile falling for a guy who is perpetually offline, then you will love this book, just as I did.