REVIEW: To Kill a Kingdom Princess Lira is siren royalty and the most lethal of them all. With the hearts of seventeen princes in her collection, she is revered across the sea. Until a twist of fate forces her to kill one of her own. To punish her daughter, the Sea Queen transforms Lira into the one thing they loathe most—a human. Robbed of her song, Lira has until the winter solstice to deliver Prince Elian’s heart to the Sea Queen or remain a human forever.

The ocean is the only place Prince Elian calls home, even though he is heir to the most powerful kingdom in the world. Hunting sirens is more than an unsavory hobby—it’s his calling. When he rescues a drowning woman in the ocean, she’s more than what she appears. She promises to help him find the key to destroying all of sirenkind for good—But can he trust her? And just how many deals will Elian have to barter to eliminate mankind’s greatest enemy?

Lira and Elian’s story was the exact Little Mermaid retelling I didn’t know I needed. Filled with swash-buckling adventure and sass so strong it made my cheeks hurt, this enemies-to-lovers romance was such a joy to read.

We all know (and love) Ariel and Eric’s epic tale and how they defied all odds to be together despite their difference in species – and if you don’t know that story, it’s time to get out from under that rock, sis.

This retelling isn’t as ooey-gooey as a prince and princess falling in love.

Since birth, Lira has been trained and honed as the notorious Princes’ Bane, sharpened by her mother’s vengeful edge. As the daughter of the infamous Sea Queen, Lira rips out the hearts of princes; killing hope, and killing the future of the human race. Lira is an unabashed, cold-hearted killer, and she carries these traits from the ocean to the Saad, Prince Elian’s ship that finds her stranded in the middle of the ocean.

But Lira isn’t the only one trying to live up to what’s expected of her as royalty – Prince Elian’s family wants him to embrace his responsibilities as the future king of Midas, but all he wants in life are his ship, his ragtag crew, and the ocean in front of him. His life is meant to be filled with adventure and ensuring the safety of his kingdom through slaying sirens, and he can’t bear to imagine spending the rest of his life rooted in one place on land. Not only would he be miserable, but what would his crew do without him? He owes as much allegiance to them as they owe loyalty to him.

Like Lira is bordering on ‘seemingly likeable villain’, Prince Elian isn’t fashioned as the ‘golden hero’. He is all things pirate, and that includes scheming, theft, flair, and wit. Lira and Elian are more or less alike, and are each prisoners in their own way: Lira to the whim of her brutal mother, and Elian to his future kingly duties that he tries his best to sail away from. 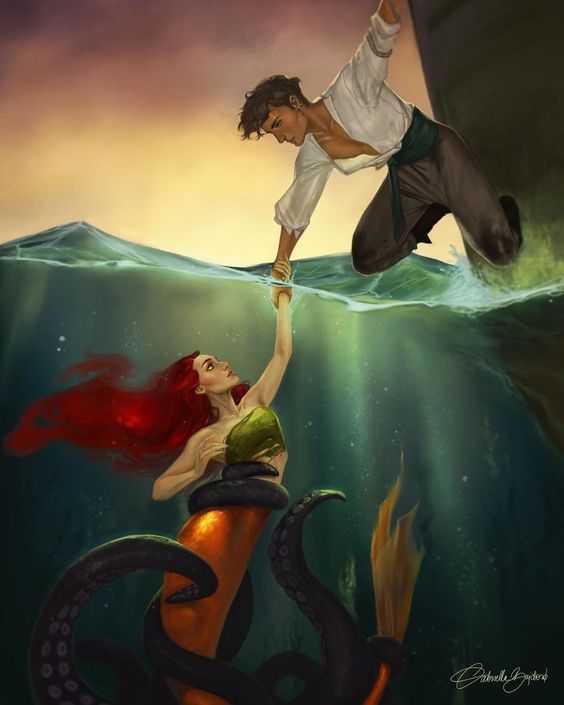 Elian rescues Lira from the middle of the ocean, understandably wary and distrusting of her. Right away, their bickering and cheekiness had me smiling to myself every couple of pages or so. (ie., “What are you doing here?” “What I do best.” “Getting on my last nerve?” “Saving you.” 😂) I also really loved Elian’s crew and the loyalty they showed their prince – but they didn’t treat him like a prince, more like a captain, which swelled his little pirate heart. Lira proposes a trade of information for a spot among his crew when Elian declares he’s going after the second Eye of Keto, a magical crystal which will grant the one who frees it the powers of the ocean – and Elian plans on taking out the Sea Queen. Lira shares his endeavor, but she wants it for herself instead.

As they venture to multiple kingdoms to gather everything they need – and as Elian makes multiple bargains to help him along his quest – Lira starts to feel at home on the prince’s ship, among the humans she was taught to hate. But her deceit is hanging in the balance, and sooner or later, Elian is going to find out what she is… but she’s hoping that Elian will look past the claws and the song and see that she has changed. That the killer she once was is no longer who she is now. Lira wants to barter for peace as much as the humans, but the only question is: will the rest of the sirens follow her?

You can’t win a war. Someone else just loses.

One of my favorite tropes is enemies-to-lovers, and this story delivered magnificently. Mixed with the quick-witted banter between Lira, Elian, and his crew, and the character development of Lira, the smile on my face was near-constant! I loved how dark this story could be, plus the irony of a prince-killing siren, and a siren-killing prince. The ending felt a bit rushed to me, and I wasn’t completely satisfied by the very last page, but for a standalone novel that delivers some brutal sea lore, enemies-to-lovers, fast-paced action, AND lush writing to boot? It just about checks off every requirement I could have in a YA novel!