Um, where did Tuesday go??? This is a holiday week and I’m still struggling. I’m trying really hard to squeeze everything into a single day though… workouts, work, Harry Potter: Wizards Unite, clean eating, reading, sleep… it’s tough. I need more hours in a day. Yesterday, I had a terrible case of the Tuesdays, though, and wanted nothing more than for it to end. And, well, I have my list of childhood books here, so are you ready to see them, even though it’s Wednesday?

Top Ten Tuesday memes are brought to you by  That Artsy Reader Girl!

Okay, I was obsessed with Mary-Kate and Ashley, guys. Literally. I don’t know what it was about them. Because they were twins? Because they just seemed so cool? Or because they were just the iconic duo that targeted girls my age? Whatever it was, I ate up their merchandise, and I watched every movie, and read not all, but a lot of their books. I don’t remember exactly how many of this series that I had (and there are a bunch of different authors that write these books),but I had more than 10… maybe less than 20? I do kind regret giving them away, because it would be fun to re-read them as an adult and see if they were really all that.

Two of A Kind
Goodreads

I didn’t read nearly as many of the Two of A Kind series as I did their previous series, but I still consumed a few. I don’t know, y’all, it was just something’ about those Olsen twins! Were any of you as obsessed with them as I was?

Another childhood favorite was Judy Moody, and one major reason I can remember liking this series is that the pictures in it were black and white, and I really liked to color them in, LOL.

I was obsessed with two sorts of things when I was younger… books and stationary supplies. (ie., notebooks, pens, planners, etc.) So when I found something that meshed the two into one?! I was in HEAVEN! Amelia’s Notebook series was everything I wanted to be when I was a small human. I remember wanting to carry that notebook with me everywhere!

Another really good series that small me really loved was The Amazing Days of Abby Hayes. What was it about? Well you know, I really have no idea. I just remember she had an obsession with calendars and wrote things in a purple notebook, and when she wrote journal entries, they were actually written in purple!

I vaguely remember the WaysideSchool series, but I definitely remember checking it out of my elementary school library often.

The Adventures of the Bailey School Kids
Goodreads

This is another series that I don’t really remember actually reading, but the covers are very familiar, and I remember checking them out of the library very frequently!

Give Yourself Goosebumps
Goodreads

I looooved these Choose-Your-Own-Ending type of books when I was younger! I remember always being disappointed if I ended up dead. And then I’d immediately go back and have to read every possible ending, lol.

Once I grew a little bit and hit middle school, I discovered this series, and absolutely LOVED it. I think this is what truly got me interested in fantasy as a small girl. 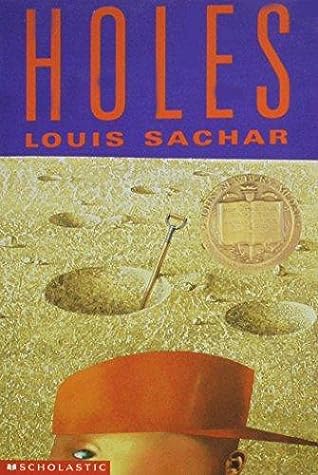 Ah, Holes. Who can forget about Stanley Yelnats and his family curse, where he spends a majority of his time at a detention center digging holes? I really liked this book, and remember a lot of my friends read it the same time I did. It was definitely a popular book for kids my age at the time.

What books did you read when you were a child? Which ones were your favorites? Did you read any of the books I did when I was a kid?

I’m linking up my post to Top Ten Tuesday at That Artsy Reader Girl!